In Conversation With… Joy Wisdom 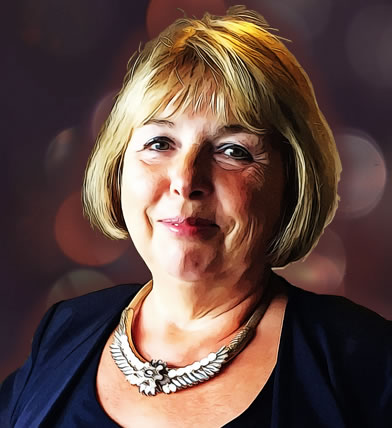 How would you describe what you do today?
I train people in how to heal others and themselves, and to that end I run the Light Healing programm, self discovery workshops and DARE (Dissolve and Resolve Emotions). It’s a very different way of approaching self-development and enlightenment that incoprorates the uncovering and healing of hidden aspects of ourselves. It’s a very broad spectrum I work with. I’m also the author of thee books: Pregnancy and Birth: A New Generation, which is about health disorders, infertility, pregnancy, how emotions from birth and early life set our foundations for life; Shell of Soul, which is about reincarnation and how we often live outworn life scripts; and my latest book Mirror Image: Facts and Solutions to Inherited Generational Trauma and Absorption (IGTA).

What is Generational Trauma?
Very little is known about this – it’s a new theory, though I have been working with it for at least ten years now. In my experience many health issues, especially mental and psychological ones, are the result of trauma, stress or powerful emotions experienced by the mother and unconsciously absorbed by the unborn child whilst in the womb. There is a bombardment of the foetus with chemicals and peptides that affect its brain development, giving rise later to coping strategies, likes and dislikes, dietary intolerances etc. as well as affecting the child’s ability to cope with stress. Behavioural patterns such as anger can also be passed down the generations and this can be seen in people whose ‘reptilian’ brain is very dominant. The brain and the hormonal environment within the womb very much go hand in hand.

So this healing work goes beyond the individual and can potentially help society?
Absolutely, yes indeed, it’s something we can all take part in. Certainly with DARE techniques we are working with cultures and lineages as well as with ‘the person on the table’. We find that as it clears problems from the individual, it also helps remove those patterns and triggers from their children and so on. So it has a far-reaching benefit for people – more than they are aware of.

What was your entry point into the world of healing and holistic thought?
My journey began in the 1990s and I guess the door opening for me was my husband having a serious accident. To help ease his pain I massaged his feet and this led to an interest in Reflexology. I studied it at night school and went on to do a professional accredited course. That then opened the door to Spiritual Healing. Doors kept opening and I went on to Stress Management and counselling. I went down the diet and nutrition route then finally got to Craniosacral Therapy. I did many years of training, in particular studying Somoto Emotional Release, which is what I really wanted to do. It is well known in America, where it was developed to help Vietnam veterans, but not so well known here in the UK. It helps with the kind of very deep trauma that refugees and those who have been in war-torn areas experience, and for whom counselling just isn’t enough.

From Somoto Emotional Release did you then go on to create DARE?
In the early 2000s I realised I had this very big toolbox of techniques but I knew there were other depths I wasn’t getting to. I started working very intuitively with them and as it proved effective people started asking me where their sister or their aunt in the USA could find someone who worked in the same way. I said ‘I just don’t know’, so I decided to try to put all my knowledge and experience together into a programme. Because I healed intuitively I had to unpick everything I was doing and find out why and how I was doing it.

Would it be fair to say you were pulling together all your knowledge and experience at that time?
Exactly. And that incorporated the energetics, the psychological, the bodywork, but also that level of sixth sense that we can develop within us – like loading an ‘app’ that enables us to experience life in a new way.

I realised that we hold memories all over our body. They are not just in the mind but are held within our energetics, our bones, our cells and our DNA. Depression can be passed on down through the generations, morphing as it does so and expressing itself in a different way for each individual. I also discovered that adverse experiences in the womb and childhood can have as big an impact as the experience of war. I did paediatrics with babies and found they had absorbed a lot of frustration and anger, not just from birth trauma. They showed me lots of things that hadn’t been appreciated before and certainly not taught in my training.

What inspires you?
The children I work with inspire me. A mother and her four year-old daughter came to see me one day. The little girl  had had eczema from the age of two weeks. She was covered in it from head to foot, and hadn’t known anything but irritation all her life. The mother told me that she had lost her father whilst seven months pregnant. All the creams, the changing of diet etc. that she had tried didn’t work because the cause wasn’t being tackled – and the cause was her mother’s grief. The child had absorbed – even been formed from – this grief, and it was expressing itself as eczema. Her skin was very poor because it hadn’t been able to grow as strongly as should have done, and her energy system was also very poor. I worked with her for forty minutes to remove the grief, using using the techniques I had been developing.

Did you work with the mother or the child or both?
Just the child – hands on and energetically as well. When she returned to me a couple of weeks later the eczema had reduced to just two small patches, one on the wrist and one behind the knee. Her homeopath couldn’t believe it, her mother couldn’t believe it.  She was also allergic to everything but can now eat whatever she wants, apart from just one thing. After the the irritation was removed I suggested vitamins and minerals to help build up her skin again. Her father came to see me and said ‘thank you – you have changed all our lives’. Before, they couldn’t go on holiday and they were also really concerned about her going to school. She’s now 14 and hasn’t had any recurrence! She inspired me to write my first book, Pregnancy and Birth: A New Generation so that other children wouldn’t have to go through the same experience.

What do you do to relax?
I use Light Healing on myself and it brings huge inner peace. It is something that grows within so that I feel very much part of the world and not separated from it. It opens the heart and helps to ignite the Energetic Heart – the third heart chakra along with the Sacred Heart and the Cosmic Heart, with the result that I live from a place of Unconditional Love. Anyone can receive it – it’s a direct feed that anyone can tap into and receive on a daily basis. I also enjoy walking – and cooking when I have the time. And I have two grandchildren who bring a lot of delight!

What’s next for you?
I’m setting up the Joy Wisdom Trust to help make my discoveries available to more people. I also have two more books in the pipeline: Global Reach – Earth Inspired, which explores the spiritual development of humanity from the 1990s to the present date. The other book is about the ‘new kids on the block’ as I call them – the Crystal children, the Indigos, and the Rainbows – their gifts and what they’re able to do to help humanity.

In Conversation With… Joy Wisdom