In Conversation With… Fiona Robertson 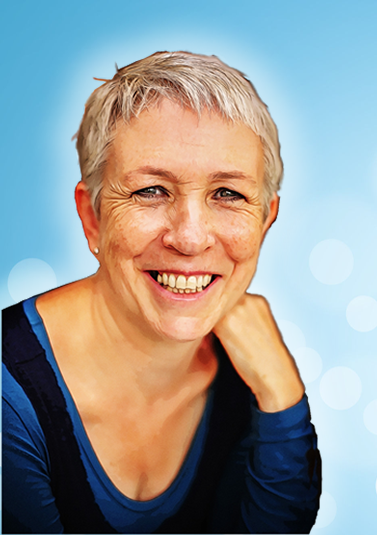 How would you describe yourself and what you do?
I’m a facilitator of a deep and embodied form of inquiry, called The Living Inquiries. I hold the space for people and walk with them in their journey, in their discoveries whatever they might be on that particular day. The process helps to unravel all the knots that we get ourselves into, the knots of belief and fear and all the other things that come up in the course of life.

How did you come to be doing this? What was your journey?
I was working in Nottingham running a community healthcare-based social enterprise – which was going really well until the funding suddenly finished, which threw me into a place of burnout and also a long and quite intense ‘dark night of the soul’ phase, during which my life and I fell apart pretty comprehensively. During that phase, as many people do I started to look more deeply – really because there was no other choice – and I came across various teachings and teachers I hadn’t encountered before. And at some point, I think in 2008, I became friends with Scott Kiloby who is based in the United States. He was experimenting with what we now call the Living Inquiries, and he trained a small group of eight of us. We then developed the Inquiries further. It was all very small and low-key at the time and we really didn’t have a plan at that stage. Scott now runs an addiction recovery centre using the techniques that we worked on together. I’ve been doing this work full time now for about seven years, working with clients and co-leading our training groups.

Did the technique that he was developing help you?
Oh very much so, yes. Fundamentally what I had been trying to do was escape or get away from what was going on within me, and the Inquiries really allowed me to start to become present and to really start looking at my experience in a way that allowed it to unravel whilst also gaining real insight into what was happening. It was massively transformative.

Was it an easy decision to say ‘I can use this to help other people’?
It was such an obvious yes that it wasn’t really a decision. I’d had a long history of working with people in other settings, and this process was even richer and more rewarding than anything else I’d done.

Could you say something about The Living Inquiries process?
It’s really about beginning with what’s here in the present moment. I don’t mean that in any particularly esoteric way, although sometimes that is part of the exploration. We come into a session with whatever is going on so sometimes there’s an obvious issue to address, which could be something at work, family relationships – all the stuff of life. And sometimes it’s simply an opportunity to take a little time, to settle, to start noticing exactly what’s here. The beginning of a session has some overlap with mindfulness. Once we’ve talked we’ll settle in, we’ll notice what’s in the mind, the thoughts and images that are there, and we’ll also notice what’s happening in the body – the associated sensations, feelings, emotions – whatever’s going on. And then we start to track how they are tying together, and as we do that the process starts to take us deeper. Say for example we have had a row with somebody at work – and as we settle in and connect with the feeling that arises  – maybe it’s a tightness in the solar plexus – suddenly we then find ourselves having a memory of something that happened when we were 15. We start to track back in a way that doesn’t necessarily follow any rationality or logic, but has its own deeper logic nevertheless.

And is that a process best done in pairs, a group, or can it be done on one’s own?
We make all three possibilities available to people. Certainly at the beginning it can be useful to work with a facilitator because that allows people to experience the process without having to think about what they are doing. We also make many resources available so that people can learn how to do it for themselves. And we offer groups. It’s all done online, making it very accessible to anybody with an internet connection.

On a slightly different track, what inspires you in life?
Although I live in the middle of the country the sea is still a big inspiration to me. I grew up on the south coast so it was part of my childhood. The publishers of my book, The Art of Finding Yourself: Live Bravely and Awaken to Your True Nature, chose a picture of the sea for the front cover and it was so perfect! Music is another great inspiration – I used to be a bass player in a band when I was in my twenties. Other people’s writing is a big source of inspiration, and doing the work itself – when we tap into that deep intelligence within us whether it’s through art or music or spiritual practice I’m always awed by what comes out, both when working with clients and in my own explorations. Often it goes to places we would never have imagined ahead of time, as we tap into deeper wisdom or get to see what was previously unconscious.

Do you have any favourite holistic practices?
I’ve run the gamut of pretty much all of them over the years – I would say the things I have found most useful on my personal journey are probably craniosacral therapy, homeopathy, some forms of psychotherapy, and of course the work I do now.

How do you relax?
I love dancing – just boogieing in the kitchen! Walking, music, chatting with friends, watching a good drama series on TV…

What’s next ? Do you have any plans for this year?
Yes I do – I’ve just finished writing a book on the dark night of the soul experience. Hopefully it will be published some time later this year. I’ll be creating a website about it in the coming months.

Why You Need To Try The Natural Healing Of Reiki